With the recent success of other mobile brands with their respective smart phone, Samsung is no longer behind and is competing toe to toe with all other cell phone brands. Samsung has already brought forward many innovative smart phones like galaxy S III, galaxy note etc. now Samsung is eyeing little bigger with its new innovative smart phone “the Samsung galaxy beam”. All the online dealers are ready assign space for this mobile in their stores.

The most important feature of this Samsung Galaxy Beam handset is a built in projector which definitely sounds interesting.

The amazing smart phone has a maximum screen size of 50 inches with quality display of 720p HD video at flat surfaces. It possesses a 4 inches TFT display. This handset is pretty cool for playing video games and playing sound tracks. The specialty of this handset is told before it has a built in projector through which games on the projector mode with a wireless controller. The projector has a brightness of 15 Lumens which can be used in places where brightness is less. The internal memory of this handy handset is 6GB.

Now if we try to analyze its performance, it has a 1 GHz dual core processor, 5 Megapixel camera and 8GB external memory which can be extended when someone wants to. For video calling and other purpose it has a 1.3 Megapixel front facing camera. Now about its operating system, it works on the ultra modern android gingerbread. It provides the opportunity to change the operating system from Gingerbread to Ice cream Sandwich. 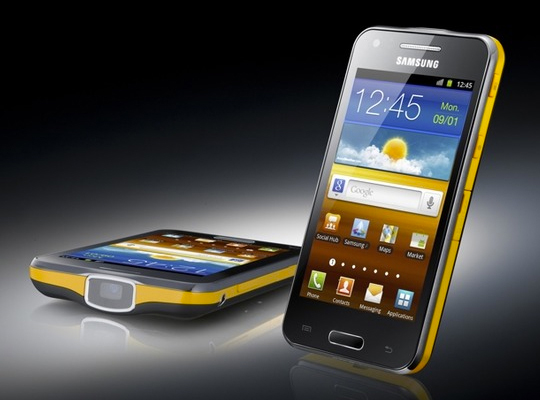 Basically if you ask question regarding why you should buy this amazing gadget the answer is simple enough and already told above. The most eye- catching feature of this phone is its projector, which can display HD images videos comfortably. This phone is appropriate for those who desire of watching movies on big screen.

It has a long lasting battery life because of 2000 mAh Battery which is enough for you to enjoy its projector facility. This is one of the coolest smart phones Samsung has ever produced and it also started preorders for the handset for Rs. 29,990. Buy it and experience it.