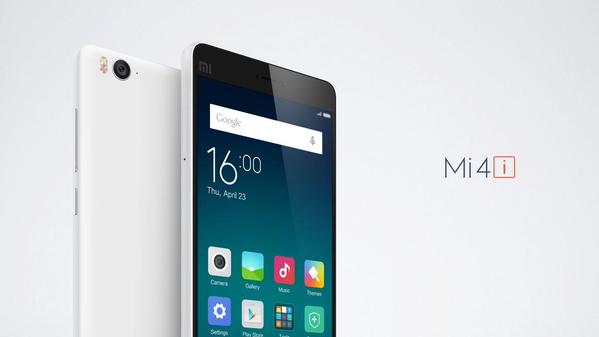 Cons:
Low sound output on most earphones; MIUI could use some optimisation; Lacks microSD card slot.

Xiaomi in a short period of time gained huge reputation in the mobile world, and has gained millions of MI fans all over the world. Making its entry into the Indian market with Mi3, it got huge popularity and bringing in its successor the Mi 4i. We will get into deep with this new Mi 4i and will find out whether the new smartphone is good enough to continue Xiaomi’s growth in India?

Unlike its predecessors, Xiaomi has stepped up to go with metallic frame with the Mi 4i. It uses a sturdy stainless steel frame which has chamfered edges giving it a chic look. However moving backside of the phone it is all-plastic though. The flat metallic chamfered edges look inspired by the design of the iPhone 5s. Even the base of the phone has a rectangular dotted design for the speaker grilles, which is again similar to the iPhone. With most of the present smartphones coming up with  unwidely phones, Mi 4i is known for its compactness with measuring a length of 7.8mm, the device is quite thin too.

The sides of the phone showcase the Micro SIM slot, volume key and power button. Compared to most Android devices, the placement of these buttons is switched — the power key resides below the volume rocker.

Along the top edge of the Mi4 is the 3.5mm headphone socket and the IR blaster, which can be used to control your television set, amongst other things.

For this new Mi 4 Xiaomi has come up with Full HD. The 5-inch screen has pixel dimensions of 1920×1080 that makes for the pixel density of 441 ppi. So there is no doubt that you would get a stunning display. The colourful nature of the UI makes the display seem vibrant and the pixel density is enough to rival any of its competitors

Since it is an IPS panel, the colour reproduction and viewing angles are good. The Mi M4’s screen is brighter than most Android phones available at this price tag. Xiaomi claims that the screen comes with a scratch-resistant glass made by Corning.

We have seen in the past Xiaomi is known for offering impressive specs at an affordable price, and the Mi 4i is no exception. The latest smartphone comes with a 64-bit Snapdragon 615 chip. The octa-core processor is coupled with Adreno 405 GPU. There’s 2 GB RAM and 16 GB internal memory (10.6 GB user accessible). What’s missing here is the microSD card slot.

Moving over to camera, you get a 13 megapixel rear camera with a two-tone flash. For selfies, there’s a 5 megapixel front-facing snapper. It is one of the few dual-SIM phones to support 4G SIM in both slots. Other essential connectivity features such as Wi-Fi, Bluetooth 4.1, and GPS are duly covered. Despite its slim profile, Xiaomi has managed to squeeze in a 3120 mAh battery in the Mi 4i.

Software
The phone is powered with latest Android 5.0 Lollipop out-of-the-box and there is full gurantee to get future updates of android with it. However, with Xiaomi’s custom MIUI 6 on top, you won’t find much of a difference between Lollipop and Jelly Bean.

It is very clear that Xiaomi has worked a lot on the software part. The UI looks polished compared to the earlier versions. Notifications bar and quick toggles are minimalistic, which is a good thing. Transition effects are quite smooth. And the overall software design is coherent — it doesn’t feel patchy.

Camera
When it comes to cameras, Xiaomi has put on its best foot forward. You get a 13MP rear camera and an 8MP front facing camera. Both the cameras sport a fast f/1.8 lens. Xiaomi has redone the camera app and made it extremely minimal in appearance.

When it comes to indoor shots, the snapper falters. A little less than ideal light and the images turn out to be grainy. The colours look exaggerated. Overall, the camera is good unless you are into low-light photography.

Multimedia
The Mi 4i plays most videos out-of-the-box. In case a particular formats fails to load, MXPlayer comes to the rescue.

Coming to the subject of music playback, the phone does not ship with earphones.

Battery
The phone packs in 3120 mAh battery. Under normal use, the juice lasts for well over a day and half. The battery performance is really good.

Mi 4i is sure a lottery for android users for this budget. With loads of features, good price tags, stunning outlook and with polished software, Mi 4i is a sure shot to go for it. However
I can’t think of any Android phone that can beat the Mi 4i in terms of construction and ergonomics. Its screen is impressively sharp.Xiaomi shall either make the phone compatible with most earphones, or bundle the ones that work perfectly with the phone.

Overall, considering its price and features, the Mi 4i is one of the best all-rounder you can buy. .

Are you familiar with android widget? With the advance of technology the smartphones are getting …
Android
More