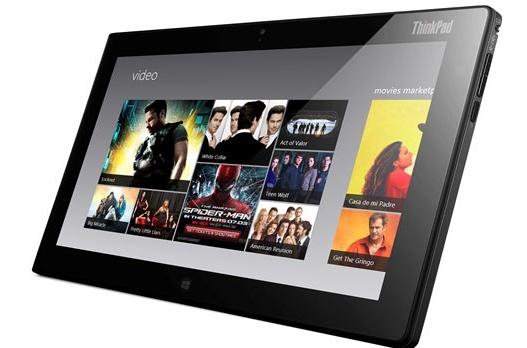 This October is geared up for lots of surprises, with Windows already being launched on 26th day of the month and few days ago Lenovo announced the sequel of its ThinkPad Tablet. Its predecessor was an Android based Tablet with stylus support. During an event at New York’s Museum of Modern Art, which marked the 20th anniversary of the company, new details were announced about the upcoming laptops as well the ThinkPad Tablet 2.

Unlike the two earlier predecessors of Surface running Windows RT which was run on a Tegra processor and Windows 8 on an Intel i5 CPU, a full fledged ultrabook.  The latest Thinkpad 2 is something really exciting because it will sport a next generation Intel Atom processor with a Windows 8 pro. To give it a full desktop like feel an optional keyboard and dock is available. The 10.1” anti glare display supports an optional digitizer with a digital pen and multi touch screen running at 1366 x 768. So the only expression which defines its display is Superb.

The tablet is really thin and light with specifications as 9.8 mm and just < 1.5 lbs. It is loaded some really exciting utilities like a Fingerprint reader, an exciting security feature and 3G wireless with Lenovo Mobile access pay as you use plans. It’s a fully featured Tablet and  some  of the jaw dropping features of Lenovo ThinkPad Tablet 2 are enlisted below  that will  surely drive you crazy .So lets  have a quick look  on  what you will be getting if you will have  it .

There is no official word on the price yet. Though Intel has failed to produce battery and heat efficient chips which has made ARM processors favorite to industries so far ; Therefore   with this we can expect the trend to change this year. Without considering the price I will  give thumbs up to Lenovo ThinkPad Tablet 2.

With the advanced technology now, you wont have to write your password when entering your …
Hardware, Tech
More

For you who want to use Windows 8, you can try it right now. Microsoft …
Free Software, Windows 8
More