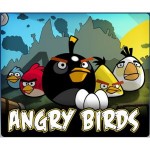 Rovio Entertainment has enjoyed a lot with its ‘Angry Birds‘ franchise. Since those multi-colored wingless fowls arrived on Android Google Play market for the first time in December 2009, mobile gamers have repeatedly come back to Rovio’s addictive gameplay with every update, new level or game expansion in the series.

The survival of the Angry Birds is at stake. Dish out revenge on the green pigs who stole the Birds’ eggs. Angry Birds features hours of gameplay and each level requires logic, skill, and brute force to crush the enemy. Recently Angry Birds Star Wars was released. If you are a great fan of  Star Wars of any kind and you own a mobile device, you should definitely get ‘Angry Birds Star Wars.’ and you can download them at Google Play. However to play android games you need the a basic requirement of Android 2.2 or later version installed with your phones, tablet or notepad.

If you have any issues with Download Angry Birds for Android let us know through comment section and will help you to sort it out.

If currently you are monitoring and waiting for information concerning a certain topic, for an …
Google, Tips & More
More

Do you know  how to auto forward Gmail ? .Nothing new for the web users Gmail is …
Google, Internet
More

Google has released Google Play, the cloud based entertainment center which allow you to save …
Google
More