Home
Apple
Apple iPhone 6 : All you need to know about it 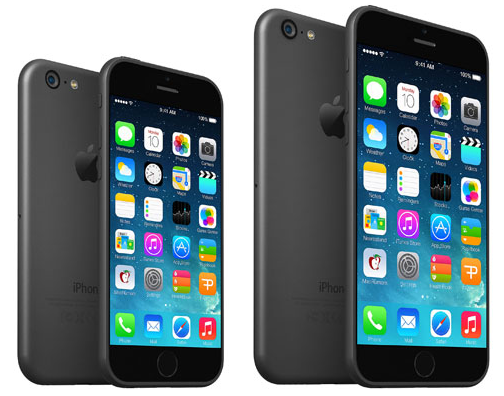 The iPhone 6 and iPhone 6 plus comes up in 3 hues as same like the iPhone 5s. but this is quite a different-looking smartphone. The edges are rounded – and this makes the phone look thinner than it actually is. The bigger size screen 4.7 inch and 5.5 inch is the primary features of the iPhone 6 and iPhone 6 Plus. It’s what Apple is calling a Retina HD display. And it isn’t just about resolution, which is 1334×750 (that’s 326ppi, and 38 percent more pixels than the iPhone 5s). No, the glass front “curves around the side to meet seamlessly with the anondized aluminum back”. The display offers a full sRGB colour gamut and features an ion-strengthened cover glass.

When moving into the OS the new iphone 6 holds an upgraded version of the A7 processor, the A8 has been used which is built on a 64-bit architecture. The new chip is all set to provide 25% faster performance and 50% faster graphics. Apple claims that, the new chip is 13% smaller than the previous generation chip. The iPhone 6 runs iOS 8 that include a new technology called Apple Pay, which lets you make secure, one-touch payments via NFC and TouchID. Apple integrates the M8 motion co-processor, tracking data from various sensors, including the accelerometer, compass, gyroscope, and the barometer.

Iphone 6 brings in major change with their camera features, boasting an 8Mp sensor, a lens with an f/2.2 aperture and this is all paired with a TrueTone LED flash. You might throw a question what is special with this?. The special is the new sensor itself, which has ‘focus pixels’ that can really help not only with faster focus, but video too. There’s also phase-detection autofocus, as found on DSLRs, and combined, the system should make the iPhone 6 much faster to focus than any previous iPhone. When it comes to shooting video with iPhone 6 it shoots 1080p footage at 30 or 60fps. There’s also slow-motion at up to 240fps (that’s double the iPhone 5s’ speed). Around the front is a new FaceTime camera. It also has a f/2.2 aperture, improved face detection and burst mode (for up to 10 photos per second), just like the rear camera. Plus, the front camera can also shoot HDR selfies. The other highlighting factor with the cameras was the presence of the Optical Image Stabilisation (OIS) on the iPhone 6 Plus. The iPhone 6 hold on with digital image stabilisation. On paper, the iSight camera on the two phones look good. With the improved processor and battery life, you should be able to shoot more and get better noise-reduction algorithms. The phase detect AF has a lot of promise as well.

iPhone 6 Price in US

There are myriad advantages and features when it comes to the new iPhone series compared to all the smartphone which have been reached in the market so for. But there are also demerits such as irreplaceable battery, high price. The new iPhone 6 is a phone for people who value perfection. What do you think off about the new iPhone 6. Drop your comments below in the comment section.

A sad news is surrounding the whole world, especially the world of technology which recently …
Apple
More

If you happen to own an Apple iPad, you have probably already installed the iOS …
Apple
More